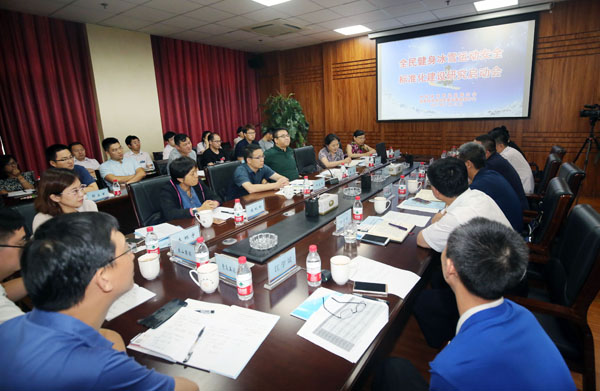 In response to the recent trends in outdoor ice and snow sports, there is a targeted approach to preventing and reducing the problems of public ice and ice-related safety. In July 2017, the National Standard Committee issued a research project on the standardization of the safety of the national snow and ice sports to the China Sporting Goods Federation.

For the start of the project, on July 22, 2017, China Sporting Goods Federation convened the National Sporting Goods Quality Supervision and Inspection Center, China Leather and Footwear Industry Research Institute and Sportswear Branch of Sporting Goods Standardization Technical Committee and other technical support units and six representatives of the enterprises to have a launching meeting of the project in Shijiazhuang City, Hebei Province.

At the meeting, the Director of the Service Department of the National Standard Committee, Xu Jianjun, introduced the importance of the research on the project and the direction of the national standardization reform. As the main unit of the project, China Sporting Goods Federation has explained the work requirements and time schedule of the project. The representatives of Hebei Provincial Bureau of quality supervision and Hebei Sports Bureau also attended the meeting. The meeting was chaired by Wen Jia, Deputy Secretary General of China Sporting Goods Federation.

According to the overall deployment of the research projects' group, the project units will complete the draft standard and put forward their own standard system framework before December 31, 2017. Enterprises participating in the seminar will also participate in the study of each sub item according to their respective product characteristics.